I went to Tallinn

I went to Tallinn. I didn’t really plan to, bu I did. Well I went to Tallinn with my company on a newbie-get-to-know-your-colleagues-conference. I was surprised by the town’s cute streets and friendly people and the easyness. We stayed at a centrally places hotel in the Old Town. The hotel had a nice garden, fine restaurant and a SPA.

Tallinn is a beautiful picturesque town, by the Baltic Sea

We flew from Stockholm one night early in June a couple of years ago. We were here in no time. I really recomend a trip like this if you want to see town without getting frunk on a boat. We had a bus booked from the airport. It dropped us somewhere in the old town and we had to find our way to the hotel. Some of the bosses have already been here before, so I gueass it was a piece of cake for them. And for all the other people? Just follow someone else. It worked out for me at least.

Cute houses and interesting flower pots in the window 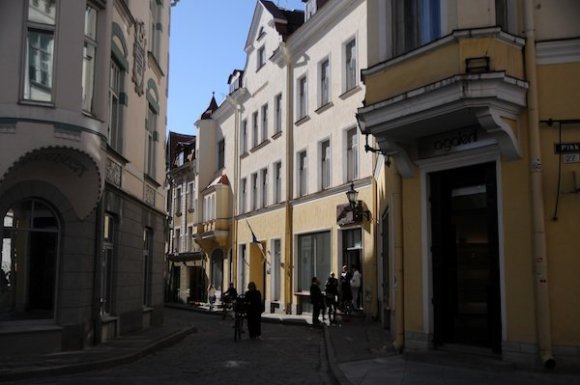 When we arrived in Tallinn it was chilly night. The goal of the trip was that we were going to get to know one another. Well, getting to know each other started already the same evening. Tired and confused we talked, drew pictures and told each other secrets, It was fun and interesting. But it was not only sitting in a conference room. No, no. We had city walks and completions and party. Of course.

The following days we had some meetings, talks and laughs. We started out with a group discussion in a bar. I don’t really remember what it was about, but I remember that we did not always agreed, bu it was fun anyways. If you are on a trip like this it’s not easy to say what happened when. I think that on yet another day, but it could have been the same day, ee had a city-group-walks. We visited the old pharmacy, where they sold mummy extract once upon a time. We went up to a beutiful ortodox church and a medeval tower. Just great.

Looking over the city together with a seagull 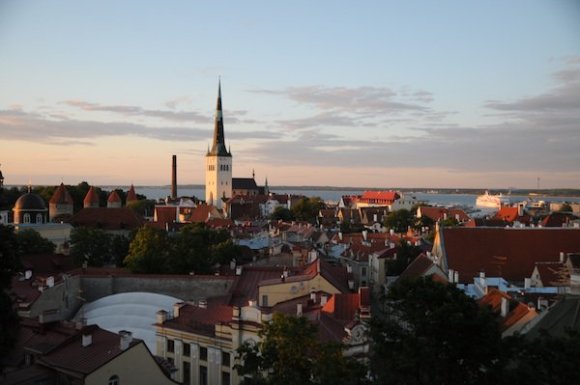 Wandering around town there was some kind of festival. There was lots of people, street theaters, competions and art exhibitions. Was it day one, two or three? No idea, but it was nice.

Walking around the town we found genuine stores with linnen and hand craft. But we also found very touristic places, like “Vodka and t-shirts” shop. I guess they had some great souvenirs and fridge magnets as well. We visited an old traditional market with linnen and wool and I bought some mittens. I guess it is a nice place for tourists. We also found a local market just outside the old town, where you could buy everything from fruit and meat, Russian books to gravestones and umbrellas.

Tunnel to the dark side

Of ourse we visited several pubs, were amazed by the view of the city from above and in the night went out partying. First we had a fine dinner in a appartment-style secret restaurant. Then we continued to a Hell-bar for drinks. The staff were not so amused when we ordered six GT:s and 6 rome and cokes and poited to a sign: “No groups”. But he served us, even twice as much as we ordered. Next place was a fun bar with some disco. And finally dancing the night away at a club with DJ:s hundreds of people and untz-untz-music. Not my favaurite, but it was fun.

While wandering around town we also found exciting stuff to eat, for instance pigs’ ears. I didn’t try, but the guys that did got sick.

Some official building, I have no idea what it says

The trip was a good one. Tallinn is a beautiful town with modern facilities and old soul. We visited a old market and a newr one, some people spent some money, others just wnjoyed themselves. Would I recomend Tallinn’s Old Town to others? Sure!

Tallinn is on the list since 1997. Link to the place: Old Centre of Tallinn.

Bath is a city in the ceremonial county of Somerset in South West England. It is situated 156 km west of London. The city was first established as a spa with the Latin name, Aquae Sulis (“the waters of Sulis”) by the Romans sometime in the AD 60s about 20 years after they had arrived in Britain (AD43), although oral tradition suggests that Bath was known before then. They built baths and a temple on the surrounding hills of Bath in the valley of the River Avon around hot springs.

We visited Bath, as we went to London for a few days and decided to take a tour to Stonehenge and Bath. I’ll write about Stonehenge another time. The tour guide, David was a wonderful person. Well educated, knew what he was talking about and did it in a fun, sarcastic and interesting way. He made me want to come back and take another tour with him. And he showed us Bath as well. We cut down lunch at some place in the country and got one more hour in Bath, nice to wonder around, but still plenty of time to see it.

Cathedral is not really three stories high, but has the same colour as the rest of town

The entire city was rebuilt in 18:th century (I think) by John Wood senior and his son John Wood junior, so all the houses look the same, three stories, white and pretty (well, now more greyish) and exactly the same. If you don’t look on the street signs, you won’t know your location. It’s cute, but a little bit boring. The river Avon is pretty and is well used, there are cute walks and a very nice park next to it. This city didn’t forget the river, that’s good.

Inside the Roman baths, at the entrance

We came there on a rainy day in October. Our guide, David, told us all about it. He pointed out the best places, both to eat scones, and ice cream and few interesting things to do. We visited the Roman baths and the museum and learned about how the place looked back then.

The ancient Roman baths, nowdays a wonderful museum is filled with stories from ancient times, statues, artifacts, rooms, temples, you name it. There is of course the warm water coming up from the depths, where the rich ancient Romans took their baths and planned what place they could invade next. It was not allowed to touch the water, but I did it anyways. It felt warm and nice.

A statue at the Roman baths, ancient, magnificent, remembering the old days 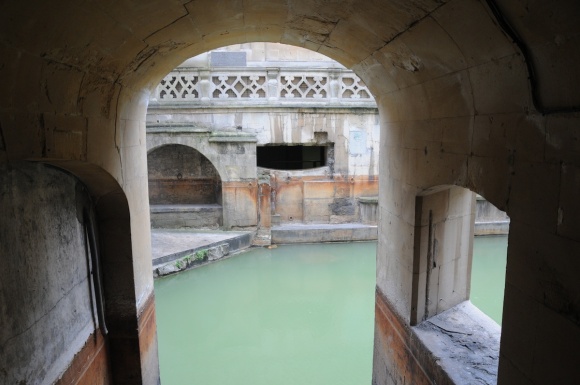 Looking over the baths. The water is greenish due to sun light and it’s pleasently warm

After the Baths we went to an old tree, that was planted on July 4:th, 1776. At least so we were told. Do you recognize the date? It was beautiful with its yellow autumn leaves.Majestic, historic and romantic. On a warm sunny day it would be pretty nice to just sit here and contemplate. But I guess that on a day like that there are huge crowds here, so forget loneliness.

After seeing the tree we went to the river and also to a market. River was nice, the market a little bit boring. We saw also a church, quite nice, but not as impressive as Notre Dame, or Westminster Abbey. We also had luch in a small anonymous pie-and-sandwich-place. Nothing special and that made it special indeed.

Still at the baths, history, museum and ancient, more or less forgotten times 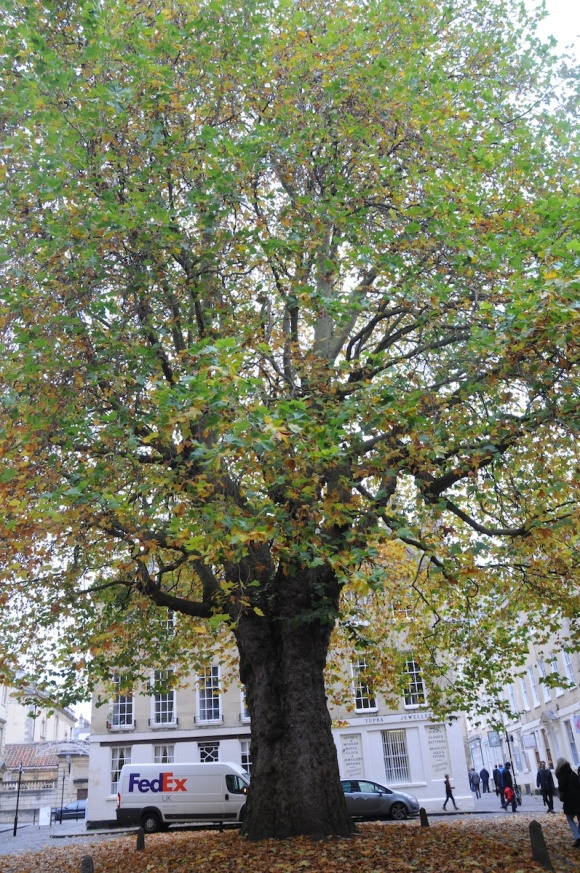 The old tree planted on July 4:th 1776, Independence Day, at least so we were told

Well, that was Bath. Was I impressed? Well, by the baths yes, by the city? Not really. It’s pretty, it’s historic, that’s it. And don’t go there in summer, it’s crowded with tourists now, I can imagine how it look in July. 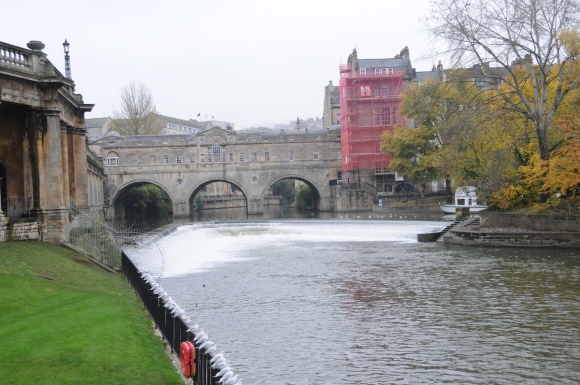 We went over the ugly bridge, sso we could look at the pretty one

The City of Bath was inscribed as a World Heritage Site in 1987. Link to the site: City of Bath.

My grade for this site is two globes. I know, it’s little. If I would grade the Roman baths it would be 3,5, but the city can be seen in a short while.

Guess what, I didn’t visit the fortress in Helsinki adain, but I found the pictures. That’s why a new post about Fortress of Suomenlinna and maybe more mamories, more exact stories and better visualisation. The year was 2003 (I wrote the wrong year last time) when I went with my dear friend, my oldest friend (no, she is not nearly hundred, but I know her since I was four years old) Ewa on a cruise to Helsinki in Finland. We didn’t want to go back and forth like many Swedes, staying on the boat and drink a lot of booze. No, we stayed in Helsinki for a few days and visited the fortress among other things. 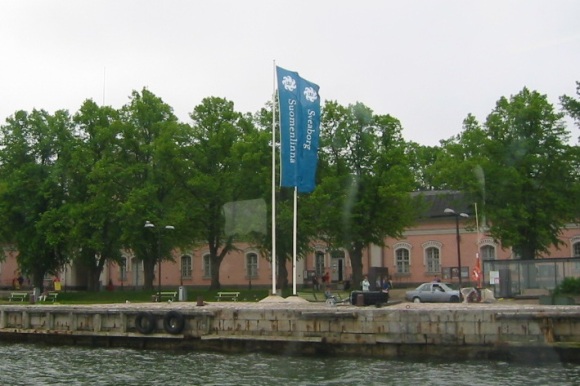 Arriving at the fortress

Some baracks, or houses

Suomenlinna is a UNESCO World Heritage site and popular with both tourists and locals, who enjoy it as a picturesque picnic site. Originally named Sveaborg (Fortress of Svea), or Viapori as called by Finns, it was renamed Suomenlinna (Castle of Finland) in 1918 for patriotic and nationalistic reasons, though it is still also sometimes known by its original name. In Swedish-speaking contexts, the name Sveaborg is always used. [Wikipedia] 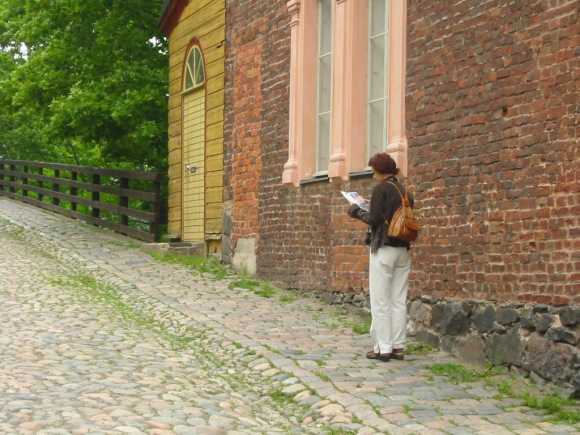 Some pathways were pretty steep on the rocky islands

A window without glass, looking out on the green scenery

A memory monument, this was not always a peaceful place

Suomenlinna is located on several rocky island and was built in the middle of 18-th century to protect Helsinki, the capital city of Finland. The fortress have a great military history with harbour, military barracs and fortifications. It’s not ols, but it has lots of history and sometimes painful memories. On one time it had to surround to attacking russions, it served as a prison and it was struck by diseases.

Prepared for an attack 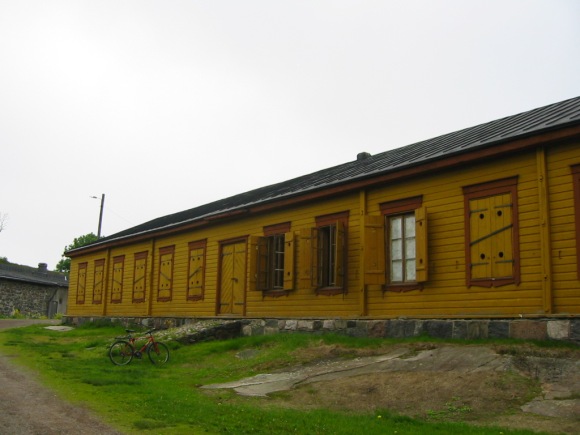 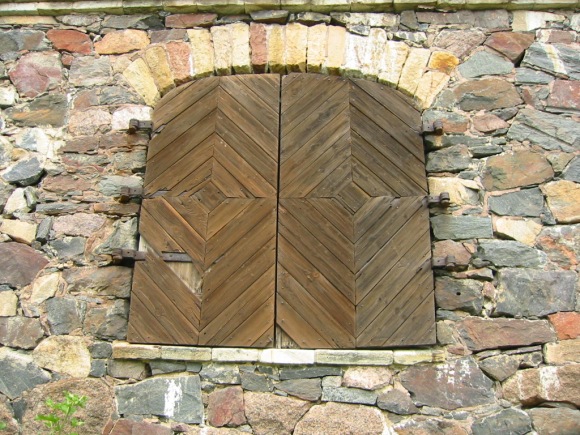 Closed window can be hiding secrets

Nowdays the place was green nice and peacefull. Since we went there in early summer it was wonderfully green and blooming. It was  pretty crowded. I guess that on a nice sunny day it’s a perfect place for a family excursion. There were both tourists and Finns. People went sightseeing and just enjoyed the nice weather. Imagine a picknick at this place, nice, green, in the middle of the city, but still outside the city. Perfect mixture! 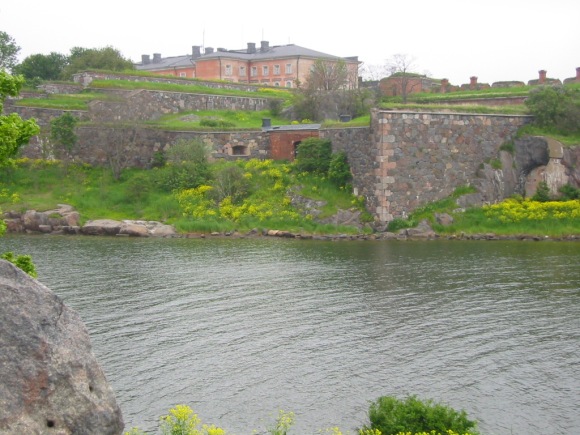 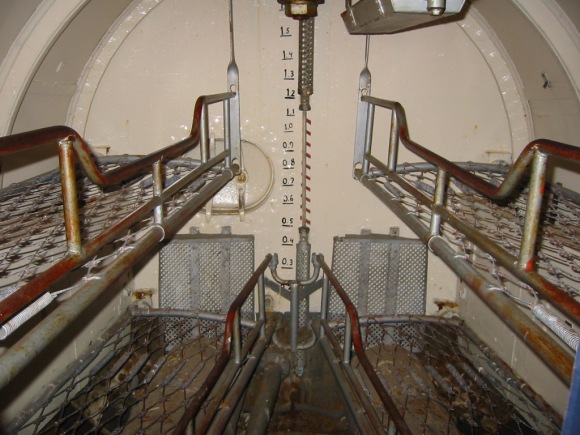 Submarine, resting peacefully by the shore

There were some military objects to see, it’s a fortress after all. We climbed inside a submarine, watched towers and had some coffe. The place was easy to reach, which is good. 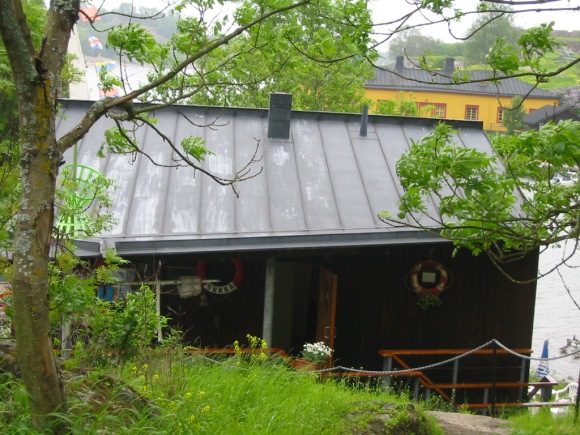 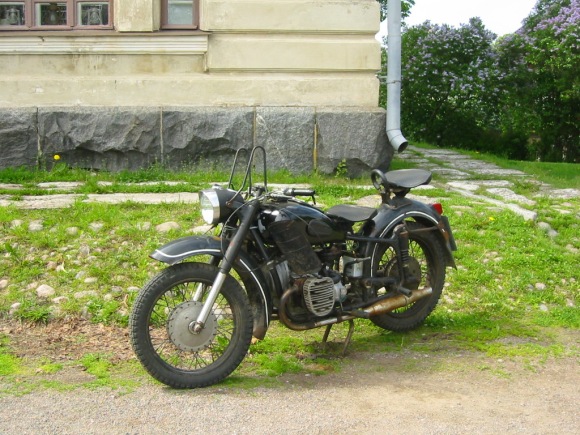 In  Swedish it is called Sveaborg.The place was added to World’s heritage list in 1992.Links:

And for my grade for this site is still three globes out of five. I was thinking about two, but there is a lot of history hidden here and it’s presented in a good way for both kids and adults.